Paddling in the Ocean of Everything

The last few weeks have seen me an utter joy to be around albeit if you are wearing a nuclear hazard suit and ear muffs.

I caught food poisoning, the flu then slipped some discs all at the same time. Right as the harvest finally got started. Right at the beginning of the 'tattie holidays'.

The harvest brought in itself like the scene in Nanny Mcfee, all magical shapes and glitter but that may have been the opiates, uppers, downers and sidewayers prescribed by the doctor. I made the sidewayers bit up but took to walking like a crab anyway, progressing to lobster mode after finding my Dad's old walking sticks.

The Farmer, possibly at the end of his tether, carefully drove me to a chiropractor in Aberfeldy and despite being convinced that one swift crack of the neck would end not only the pain but my very life, back was sorted beautifully.

Nothing shifts the cold and flu quicker than standing in a very cold, windy field, hauling lumps of stuck straw out of the bailer. The wind forgot it's manners and rather than a Victorian glove type slap on the face, it was more of a punch with a knuckleduster and a good eyeful of straw thrown in the eyes just in case it missed the first time.

The Farmer drove past happily in his heated combine, Eldest Son and I wrestled with the stuck bailer and oaths were carried away on the wind to be hollered in someone's ear who lived miles away and would be all shocked.

We managed to get some of the barley in before the rain came again and the combine got stuck in the field, the same as the next farm and the farm further past that one. The ground beyond saturation after months of rain.
The oats are still uncut and bar from hand scything them (which is *bound* to put your back out), there is little we can do except wait for a hard frost which will firm up the ground enough to take the weight of combine and tractor.

There was only one answer to the long faces, longer wet days. The Mother of Death by Chocolate cake. We would all burst our arteries but die happy.

I threw everything chocolatey into the monster sized cake, cooked it to slightly burned perfection, removed it from the oven then dropped it on the worktop where it smashed into many pieces. Many.
Undaunted and now *driven*, it got stuck together with a bucket load of salted caramel sauce (Thank you, MmeLindor) and a mountain of chocolate ganache to hide the damage. The ganache was so thick, I was tempted to mend the roof with it. The roof I am not supposed to mention so you never read that bit.

This is the panacea for all evils and ills, ridder of flu, sorter of backs, lifter of spirits, clogger of arteries and the Devil may care.

I would share but it has mysteriously vanished.
Posted by GentleOtter at Monday, October 31, 2011 6 comments:

FROM A RAILWAY CARRIAGE

Faster than fairies, faster than witches,
Bridges and houses, hedges and ditches;
And charging along like troops in a battle
All through the meadows the horses and cattle:
All of the sights of the hill and the plain
Fly as thick as driving rain;
And ever again, in the wink of an eye,
Painted stations whistle by.
Here is a child who clambers and scrambles,
All by himself and gathering brambles;
Here is a tramp who stands and gazes;
And here is the green for stringing the daisies!
Here is a cart runaway in the road
Lumping along with man and load;
And here is a mill, and there is a river:
Each a glimpse and gone forever!


My eldest son and I travelled to Birmingham on the train.

We left the farm at 6am then spent the rest of the day slumped against a train window (or sitting bolt upright depending on alighting passengers with baggage and respecting the 'British' thing of not making contact by accidentally brushing a knee or shoulder).

The journey was an education in itself - derelict buildings melted into forgetfulness, concrete forests sprung from long forgotten earth, there were few trees, curves or patches of green. 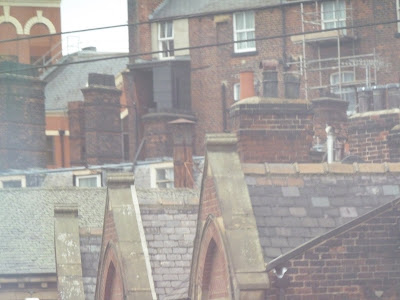 Chimney pots took on the persona of the passengers; different shapes and sizes, different colours, all piled higgeldy-piggledly as comfortably as they could, perched on their narrow plinths like roosting birds.

There were huge metal towers which looked like they were made of industrial lace, delicate yet sturdy and offering an almost etheral beauty, skyward. 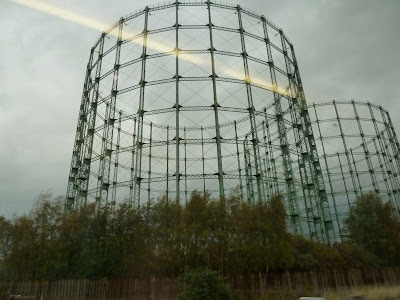 People came and went. They ate, drank, laughed, sat silently, read. One or two slept seemingly unaware of the noise and movement all around them.

The journey and people were fascinating. We are so used to isolation at the farm, few visitors, few trips into town, it was quite overwhelming to make contact with enormous crowds of people and all the noise and bustle they make.

I found the Best Tree Ever. 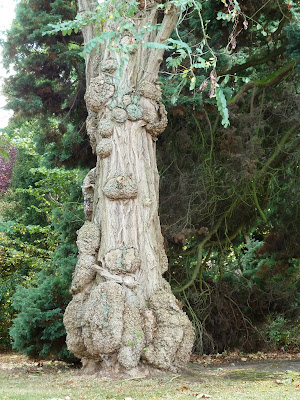 It spoke of fairies and witches, probably housed a few yet stood with quiet dignity amid the urban chaos.

The journey home was this side of Hell.
Eldest son had three enormous glass boxes which could have easily housed a Great Dane or Newfoundland dog. There was no easy way of carrying them and I think I huffed to Morpeth then gave up the will to live.

Four men had a fight just outside Newcastle but two seats away. I worried about the glass boxes making contact with irate large men but the aggrieved alighted and continued their fight on the platform.

Hours later, the train broke down at Stirling so we had to continue by bus....my soul may have left my body at this point, aided by the person who coughed every three seconds then sniffed snot into a blocked nostril.

We arrived home after midnight. It was pitch black and the familiar mud squelched reassuringly under our town shoes.
The glass structures designed by Satan made it home in one piece, the carriers slightly more frayed.

I stood outside in the dark.

Not a sound.
Not a soul.
Big sky, tiny stars.