My apologies to The Rime of the Ancient Mariner and Samuel Taylor Coleridge but I could not think of any phrase more appropriate.

The Farmer is beginning to despair. The wet weather has made the harvest impossible to gather so the remaining crop of oats, partially harvested, now stands in a sodden isolation, a little island in a sea of waterlogged soil.
The Farmer must try to reduce the moisture content of the grain from a harvest high of around 40% to 16%. This entails cranking up the old grain dryer which is run on a combination of diesel and electric, a giant tumble drier, if you like, albeit one which is eye wateringly expensive to run. (No pun was intended there, I can assure you.)

That is, if it runs. The wretched thing broke down but given that it is only slightly younger than me, these things happen.

I cannot help The Farmer just now as I am at home with our little boy. Our son developed an alarmingly high temperature, upset stomach and vomiting which lasted two days. We are keeping him from nursery even although he is over the worst now. We do not want to risk infecting the other children.

The thing is, our little boy drank some water from the tap in the kitchen in the farmhouse at the weekend.

He did so because he was thirsty and at the age of four, is independent enough to turn on a tap and pour himself a drink. He was thirsty and it only took less than a minute.
He had not asked me to open the bottle of water beside the sink because he wanted water *immediately* with all the impatience of a thirsty four year old. 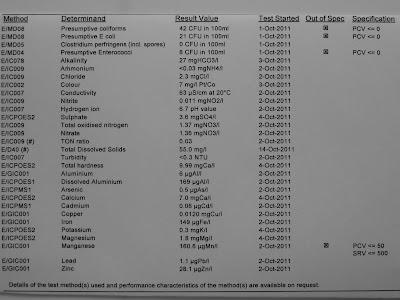 The water supply which feeds the farm comes from a cast iron pipe which was interred through the farm fields in 1895 or thereabouts. Forgive me if I am inaccurate by a couple of years before or after.

There was an agreement between the landowner and a large public school that the school would have access to the water supply on the condition that the farm would be given 'free' water'.

The school bifurcated the pipe and laid a new one through our fields. We asked if we could have access to their clean water and were refused so we are still fed by the decaying cast iron pipe. The one that the school rejected.....

I was led to believe that everyone had a right to clean water.

I am no scientist unless you include a Ph.D in Cleaning Up Sick. I am, however, a mother who recognises the needs of a very distressed child who has 'picked up a bug'. I also recognise that the most likely source of this 'bug' was from the kitchen tap given we were at the farm trying to dry the grain and did not leave the farm.

The water was not tested for cryptosporidium as it costs approx. £250- 350 per test. This is why Environmental Health do not test for crypto.
Ditto Legionella, too costly to test for but someone must have as we received a 'Boil water' notice in July to safeguard against Legionella. The entire community received such a notice yet, to my knowledge, no further mention was given that the issue was resolved.

Our son was very apologetic and tearful when I asked him if he had eaten or drank anything he ought not.

"I drank the water from the tap although I am not supposed to".

A four year old boy who recognises that he is forbidden from taking a drink of water when he is thirsty yet thirst overcame the forbidden.

I will remind anyone who is reading that the landowners fitted a water filter to the farmhouse tap then disconnected the electricity supply, thus rendering the system useless. The filter then shattered when the temperature inside the farmhouse kitchen fell below minus 16 last winter.

It is patently clear that this government, in Scotland, are ignoring a fundamental right to clean water. An entire community are ignored, yet, alarmingly, there are plans to build new houses which will be fed by the private water supply. (n.b. full water rates are paid to the landowner by the community).

Why is this allowed to happen in Scotland, in 2011?

One would almost believe that the rule of pheasant over peasant was being exercised despite the Abolution of Feudal Tenure Scotland circa 2000. Profit over health.

We are asking for your help.
Posted by GentleOtter at Thursday, November 24, 2011