I'm wondering if the wonderful Dundee poet, William Topaz McGonagall, had been inspired to put pen to paper after seeing a vacant farm, perhaps?

This blog entry has been inspired by not one but three empty farms....and not a cow in sight.

Before I write, I would like you to see a very basic definition on the three different types of agricultural tenancy in Scotland. The following excerpt is from the Shelter, Scotland website.


Which agricultural tenancy do I have?

Now, I can only speak for the other Secure tenants in my ken but the consensus appears that we all want to buy our farms from our lairds. We do not want to be held under feudal oppression and it would appear that the lairds hold us in utter contempt even more than certain Scottish government ministers do.
There was a debate in the Scottish Parliament yesterday on the issue of land reform - I will leave you to read the reports of those far wiser and more eloquent that me but from what I saw, the SNP had been caught by a 1960s Headmaster who commanded "YOU BOY! Yes, you. Come to the front of the class and explain your sleekit behaviour".
Some of the speakers had to be given Chinese burns on their wrists before they spat out that yes, they would look at the issue of tenant farming. It was like watching blood trickle from a stone.

We will see what happens but I do worry about the repercussions to those of us who are vulnerable, meantime.

Community buy-outs were mentioned. Lairds choked on their afternoon snifters. One laird even went as far as going stir crazy and donating TWO of his 55,000 plus acres for ten years, such was the emotion. How many people in Govan will benefit from all those lovely vegetables from a big, fat two acres? Was that an acre per finger, your lairdship? 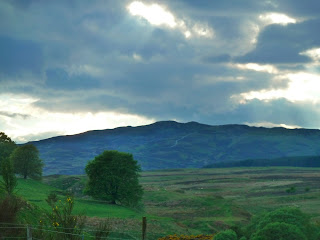 I posted this picture the other day but this area had three farms. The families went to the local rural school with The Farmer's father. a grocery van used to drive around selling wares regularly and the last time the ground was worked was in the 1970s.  A local tenant (Secure tenant) was given permission to plough up a bit for grass. The factor had been vague about the acreage to be ploughed so the farmer kept going and 40 acres later, an out of breath factor commanded he stop.
The farmer told us the land barely had a stone in it and you could "Shove kindlers in that ground and they would grow"
The farmer sowed grass for grazing his sheep and it did well, grew well.

The laird decided that this would make good grouse shooting so the farmers were evicted and every stone of their houses removed. A bed frame and old stove are the only clues that this place once held families, supported visiting vans, the fields once grew barley. This little area suffered the Clearances circa 1930's -1940s.
I suppose it was important to shoot grouse whilst some went away and fought for their country.

This land could easily support a few families. I would love nothing better and see it scattered with wooden houses like the one we are living in, huts for holiday makers...the ideas are endless if the land was freed up.

Stranger still, the land and *FOUR* neighbouring recently empty farms (all once inhabited by Secure tenants) (plus a further two farms which were amalgamated 50 years ago); they were never offered to the Secure tenants but instead given to a newcomer who, how do I put this diplomatically, was relatively new to farming for a chap of our age.
Sorry if that sounds like sour grapes and that is not my intention but it is unusual for a town lad to take on four (6) farms all at once.
I won't deny this chap works really hard and is giving it his best shot, with heavy promotion- does he have to pay the laird a cut too like we do?
He is not a Secure tenant but a Limited partnership, in partnership with possibly the estate and in a partnership which could be terminated at the drop of a deerstalker; yet local feeling is that we don't actually KNOW who owns the estate.
Could it have been bought out by one of the huge land agencies? Who knows, there is no way of knowing this information in Scotland, hence Andy Wightman's tireless work to find out Who Owns Scotland?
We do know that the estate run by the laird's folk has long ceased, all the gamies evicted and a big-wig land agency calls the shots.

Is this land grab by stealth we are seeing?

Because we cannot find out if there was a sneaky buy out, there is no way of finding out if our registered Right to Buy was triggered off. Sneaky, hmm?

Furthermore, our much respected and late neighbour who died a year or so past, he had a Secure tenancy, he worked the farm with his brother and nephews. Because of the stifling succession laws in Scottish Agricultural law, his brother was unable to take on the farm as a secure tenancy and the nephew was forced to agree to a short limited tenancy. So don't believe all the guff about the support given to new entrants - their farms could be taken back by the estates in as little as 5 years.
So because the Ag laws are stacked against the Secure tenant farmer, a loophole in the law can see a family who have farmed their farm for generations, lose the farm through a limited duration tenancy. You could not make this up!

I find the statements from the Scottish Tenant Farming Association rather disingenuous when they state that 'Tenant farmers do not want the right to buy". Secure tenants DO want the right to buy their own farms and ONLY their own farms, the Limited Duration Tenants and Short Limited Duration Tenants do NOT want to buy their farms; well, perhaps they WANT to but they are not given the opportunity as their tenancies are so short and they could find themselves out.
The Partnership tenancies are not going to ask for the right to buy as they are 50% laird/land agent.
So the broad statement by the STFA makes it look like ALL tenants do not want their own farms but it was never broken down and clarified; the secure tenant silenced by those who were supposed to support.

And the Estates/ Land agents snap the farms back from the tenants, thus locking the land and keeping the population of communities under control.
One man benefits from 36,000 acres of shooting land and don't think for one minute that the community sees any benefit. They don't.

Next shoot, I'll keep an eye out for any 'weel kent faces'. There are all sorts on these moors, judges, police, maybe even MSPs... no wonder the shooting laws have not been looked at in years. The shoots come so damn close to the house, you can almost smell their breaths.

Let's work to getting these rogues off the hills and seeing the land worked properly, feeding and housing the ordinary people.