The water has been turned off again, this time for four days now. - the usual; no written warning, nothing...

We have a handful of cattle in the shed, one or two calves being hand reared some cattle ready for market. All of them need water so The Farmer and I are back to lugging 25 liter containers of water from the temporary house and up to the farm.

The last time that the water was turned off with no warning came right in the middle of calving so water was imperative, clean water very important.

During winter, our water went off - not through freezing but was switched off. Our MP demanded the estate provide water and a bowser appeared for the cattle - none for us - the bowser was then removed the following day and a limited supply of water reached the cow sheds. It went off again soon after and it was easier to lug containers than to get the estate to either explain why the supply was off or even contact us.

Our 1890 lease forbids us from providing our own water supply. We are wholly dependent on the laird providing the farm with water. We are forbidden from digging a well or sinking a bore hole.

I know that certain land agents read this blog so this part is for your eyes in particular.

The same land agents who ordered someone to do this...... 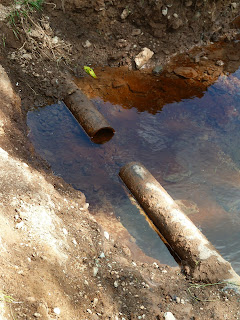 "Affirms that the human right to safe drinking water and sanitation is derived from the right to an adequate standard of living and inextricably related to the right to the highest attainable standard of physical and mental health, as well as the right to life and human dignity"

The human right to water places certain responsibilities upon governments to ensure that people can enjoy "sufficient, safe, accessible and affordable water, without discrimination" (cf. GC 15, below). Most especially, governments are expected to take reasonable steps to avoid a contaminated water supply and to ensure there are no water access distinctions amongst citizens.

"Without discrimination". Read on.....

"It is now time to consider access to safe drinking water and sanitation as a human right, defined as the right to equal and non-discriminatory access to a sufficient amount of safe drinking water for personal and domestic uses—drinking, personal sanitation, washing of clothes, food preparation and personal and household hygiene—to sustain life and health. States should prioritize these personal and domestic uses over other water uses and should take steps to ensure that this sufficient amount is of good quality, affordable for all and can be collected within a reasonable distance from a person's home."


I will remind the laird or the land agents who run the estate that we are humans. Our livestock rely on us, our crops are managed by us.
We have dignity and will not be forced from our farm through harassment and bullying.

If we were given the absolute right to own our farm then we would be free of the constraints and whims of the landowner who seems hellbent on Clearance by drought using terms set in 1890.

Urgent reform NOW, Mr Lochhead. We thirst for it.

Estate plumbers arrived first thing this morning without warning that they were going to dig our hay field up and stop our water supply again.
Water is off (it would be once a digger smashed its way through it) and we have been informed by the plumber that the situation is ongoing, they will keep digging through our fields, the estate never asked them to inform us of the work and they 'did not even know who people are'.

Just to note that this farm has been inhabited by my husband's family since 1890. 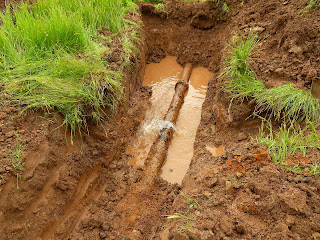 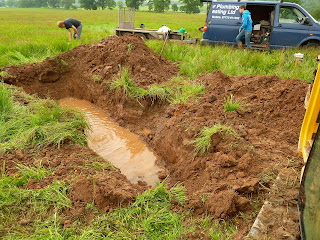 27th June 2013 : I received a phone call from Environmental health yesterday. The result of the sample taken from our water supply shows an e Coli count of 8 and a total coliforms of 11. Chemical analysis will take longer and I will publish the results when they arrive.
As a result of the water taken from our farm water supply and used to top up the local village supply after the pipe was left open for four days, this has led to the entire community being put at risk. Boil water notices have been issued but people were drinking this water without realising how dangerous it was.
I will reiterate that the landowners charge households on the estate, the council rate for water.